Lark Journeys started on the simple premise to share the incredible beauty, pristine landscapes and diverse cultures of Namibia with the rest of the world in a manner that enables you to depart with a lasting impression and lifelong memories of Namibia.

Covering much of the eastern part of country is Namibia’s second desert, the Kalahari.

Covering much of the eastern part of the country is Namibia’s second desert, the Kalahari. The word Kalahari comes from the Tswana word Kgalagadi, meaning “the big thirst”. This unique area includes vast red sandy dunes but also a large part characterized by grassy plains, shrubs and acacia trees. This set of contrasts of landscapes is partly due to the difference of temperatures within the vastness of the Kalahari. Although receiving more rain than the Namib the porous and sandy soils cannot retain much surface water. Even so, this area is home to a number of plant, mammal, amphibian, reptile and bird species.

The Kalahari is also now the region of Namibia that is most associated with the KhoiSan people, sometimes referred to as the Bushman, and whilst they have been documented to have hunted and gathered all over Namibia & Botswana as far back as 70,000 years ago, the San people are more commonly found in the Kalahari where they could live their hunting and gathering way of life with the most ease due to the abundance of flora, fauna and fairly consistent rainfall.

The Kalahari, whilst not quite as famous as Etosha in terms of wildlife viewing, offers some game viewing opportunities from private game farms & nature reserves to the Kgalagadi Transfrontier Park (in South Africa), a haven for the famed black-maned lions of the Kalahari, and other predators including the brown hyena. This Kgalagadi Transfrontier Park is a must-see for any feline fanatic, with a healthy population of cats from lion, leopard, cheetah, African wild cat to name a few. In addition, the landscapes are breathtaking and provide an interesting contrast from the plains of Etosha National Park. 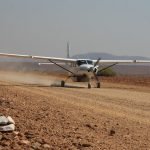 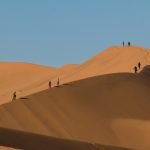 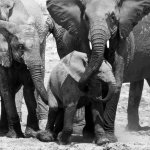 You don't have permission to register